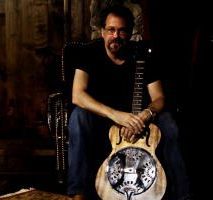 In 1990 Cliff Eberhardt's song "My Father's Shoes," appeared on Windham Hill's Legacy collection, leading to a deal with the label. With a new lease on life and a fresh batch of songs, Cliff embarked on what has turned out to be an artistic renaissance. Recorded in the Texas Hill Country, Cliff's 2009 album “500 Miles: The Blue Rock Sessions” may be his finest to date. An intimate album of powerful originals and unique covers, it features a reworking of his hit "The Long Road," a song made more poignant after nearly two decades of touring and recording. Long one of the most respected songwriters on the club scene, his peers often mine his catalog for themselves.Performers who have recorded his songs include Richie Havens, Shawn Colvin, Russ Taff and Buffy Sainte Marie. http://www.cliffeberhardt.com/bio/

Louise Mosrie began writing songs about the South – what she knew and where she grew up. In 2008, she began working on a new album eventually to be called “Home” because she’d come full circle in her “voice” as a writer. The album was a mix of bluegrass, country and folk and as she weaved in lush stories and songs about southern life, she was even introduced once as “…William Faulkner with a guitar”. She’s played at The Bluebird Café in Nashville, Club Passim in Boston, Caffé Lena in NY and was just recently invited to play at The Birchmere in Washington DC.
http://www.louisemosrie.com/bio.html