Classes and Forms: The Landscape of Colonial Boston’s Public Schools 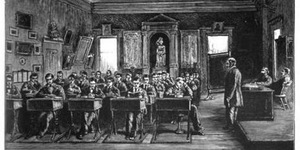 Colonial Boston took pride in its free public schools, which educated young Benjamin Franklin, Samuel Adams, John Hancock, Paul Revere, and thousands of other boys before the Revolution. But a close look at those five grammar and writing schools reveals that they provided only limited opportunities for middling-sort boys, not to mention no place for girls or non-white boys. Colonial Boston’s schools thus reflected and reinforced the town’s social and economic divisions. The creation of a new nation spurred major reforms in 1789, eventually leading toward today’s public education.

J. L. Bell is the author of The Road to Concord (Westholme, 2016) and a contributor to several other books about eighteenth-century America, including Children in Colonial America (NYU Press, 2006). He maintains the website Boston1775.net, offering daily helpings of history, analysis, and unabashed gossip about Revolutionary New England. He is a fellow of the Massachusetts Historical Society and an elected member of the American Antiquarian Society and the Colonial Society of Massachusetts.