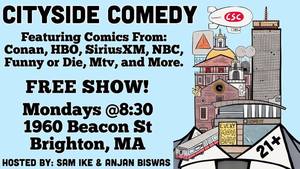 Cityside Comedy is thrilled to have Andy Sandford! Andy made his late night debut on CONAN, which was included in The Laugh Button’s “Top 5 Late Night Stand-up Debuts of 2015.“ Andy also has an album, Me the Whole Time; which made several “best of” lists, including Splitsider’s “9 Best Standup Specials & Albums of the Year.“ Andy also played an animated version of himself on Adult Swim’s Aqua Teen Hunger Force. Brooklyn Magazine named Andy one of “Brooklyn’s Funniest People,” and the Village Voice called him “one of New York’s comedic gems”.