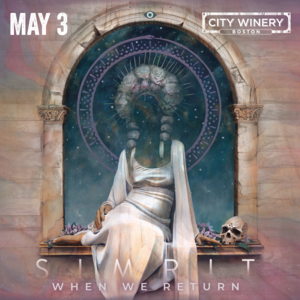 “Her sense of melody, her energy, and her musicality set her apart. Simrit, to me, is the voice of this new day and age.” Belinda Carlisle (The Go-Go’s)

"Everyone in SIMRIT is a master of their craft…Even more critical than individual skill is the fact that their collective chemistry…Their whole is substantially greater than the sum of its parts." -Oz Fritz (Grammy Award Winning Sound Engineer)

Transcending genres with their eclectic and eccentric blend of instruments and lineages, the SIMRIT experience is based around lead singer-songwriter, Simrit Kaur, born in Athens, Greece and adopted by Greek Americans into South Carolina. Roots Reggae, The Grateful Dead, Mazzy Star, Led Zeppelin, among many others including the traditional Greek music she was steeped in from a young age, have proven deeply influential as Simrit has unlocked her own unique sound.

A breathtaking voice, melodic brilliance, and unique songwriting ability is what makes Simrit special. Her musical education is rich and diverse. From lifelong vocal training in both the classical systems from the west and east, to the mystic chants of her Byzantine Greek choir, her voice reverberates a sound that is both ancient and fresh. Decades of study and experimentation with Kundalini yoga deepened Simrit’s relationship with the quantum technology of Naad Yoga (the ancient science of using sound to impact the brain’s neural pathways and chemicals, eliciting altered states of reality); the effects of which influence her music.

Rounding out the SIMRIT experience is Salif Bamakora on kora, Shannon Hayden on electric cello and guitar, Jared May on bass, and Devon Ashley on percussion.

Salif is an accomplished and unique kora player (the 21 stringed West African harp). He is a long-time devotee of West African music and griot, which transmits an age-old richness into his playing and presence. His mentors on the kora include the renowned brothers and kora masters Madou and Toumani Diabate, whose family lineage with the instrument dates back to its invention. Salif’s innovative brilliance on the kora adds a melodic and rhythmic genius to the SIMRIT sound.

Shannon Lee Hayden is a virtuosic cellist. She knew she wanted to be a cellist at the age of three. Her classical education included studying with two of the top cello teachers in the country, who, incidentally, had radically different styles and approaches to the instrument.. This may partly explain her uncanny ability for improvisation, rare in classically trained musicians, and her ease with crossing over into the world of electronics, sampling and looping. Her work on the electric cello is awe-inspiring adding a powerful and psychedelic feel to the SIMRIT sound.

As far as drummers are concerned, Devon Ashley is as soulful as they come. Steeped in the rich musical legacy of the black church, Devon picked up the drums at the age of 6. Later, as a drummer for the Lemonheads, he experienced firsthand the hybrid world of alt rock. Growing up in the urban zone of Chicagoland, his musical DNA includes underground rock, soul, rap, blues and anything else that hit the streets of big city midwest America in the last 40 years. Devon’s exceptional feel and rhythm pocket provide a backbone and launchpad for the SIMRIT sound. Jared May is a heavyweight on the bass. He boasts an equal, but different level of versatility in music. Classically trained on upright and electric bass at the University of North Florida, his jazz roots launched him into a successful career playing in a variety of bands ranging in style from soul, reggae, rock, funk, and hip hop.

Join us before the show in our music venue and experience our full menu from the comfort of your concert seats. We offer the unique opportunity to enjoy dinner throughout the performance and encourage you to arrive early and “Indulge Your Senses” with wine, music and great food!