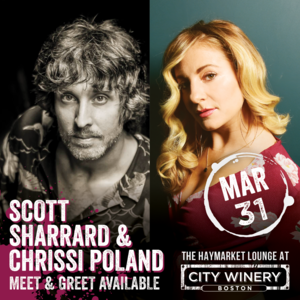 There is a meet and greet available for this show: http://bit.ly/ScottSharrardVIPCWBOS

Scott Sharrard spent nearly a decade as lead guitarist and bandleader to the late Gregg Allman.
Their partnership included the Sharrard-penned “Love Like Kerosene,” which Allman covered on 2015’s “Gregg Allman Live: Back to Macon, GA,” and again on Allman’s eighth and final solo album, the posthumous, GRAMMY-nominated “Southern Blood” (Rounder Records, 2017).
Another “Southern Blood” track, “My Only True Friend” – co-written by Sharrard and Allman – earned a GRAMMY nomination for Americana Song of the Year.
The singer, songwriter, guitarist, producer and arranger earlier released three albums with The Chesterfields before embarking on a series of solo efforts. The Michigan natives latest, the top 10 Billboard blues charting solo effort and widely critically acclaimed “Saving Grace,” was delivered in 2018.
Scott is currently working on his 6th solo album with longtime producing partner and Grammy winning engineer, Charlie Martinez. The album is set for a Fall 2020 release.
In addition to touring all over the USA and the world with his band, Scott is the newest member of the legendary Rock and Roll Band Little Feat, stepping in after the passing of Paul Barrere back in November 2019. They plan to collaborate on more shows and a possible new album in 2020.

Chrissi Poland
A singer, songwriter and multi-instrumentalist, Poland weaves together the sounds of soul, blues, jazz and pop to create a uniqueness that has put her on the map with some of the best in the business. Drawing comparisons to Carole King, Aretha Franklin and Joan Osborne, Chrissi was a touring member of Rock ’n Roll Hall of Fame legend Sam Moore’s band (Sam & Dave) from 2008-2012. Poland also appeared with Bette Midler as an official “Harlette” for Bette’s 2014 album release promo tour of “It’s The Girls”, again exhibiting her vast diversity as a performer. Poland’s original songs have appeared on the HBO, NBC, Bravo networks, as well as Netflix. Her song “Possible” was recently featured in a Bare Minerals TV campaign in the UK. In 2015 and ’16 an invitation to open for the Grammy-winning Blood, Sweat & Tears was extended to Chrissi for two tours, and she is currently touring with Grammy- winning soul singer Michael Bolton as his duet partner while he promotes his new orchestral release “A Symphony of Hits”. With four solo albums, three EP’s and a slew of singles released, Poland will be releasing singles and EP’s throughout 2020.

Join us before the show in our Haymarket Lounge and experience our full menu from the comfort of your concert seats. We offer the unique opportunity to enjoy dinner throughout the performance and encourage you to arrive early and “Indulge Your Senses” with wine, music and great food!