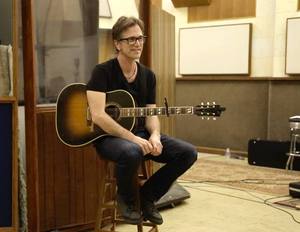 Due to unavoidable and unforeseen construction delays, this show has been moved to September 29th at The Red Room at Cafe 939 (939 Boylston St., Boston). Previously-purchased tickets will be valid for the new date and venue, otherwise refunds can be obtained by contacting bostonconcierge@citywinery.com or (617) 933-8047. We apologize for any inconvenience this change may cause.

"Words & Music by Dan Wilson" will feature an evening of songs and stories that pull back the curtain on the art of songwriting. A Grammy-winning singer-songwriter and producer, Wilson has written by himself and with collaborators such as Adele, Dixie Chicks, and Carole King. He will share writing insight and tell the stories behind the songs, including some of his most successful collaborations.

Wilson's considerable songwriting résumé includes three modern classics: “Closing Time” (written for his band Semisonic), “Not Ready to Make Nice” (cowritten with Dixie Chicks), and “Someone Like You” (cowritten with Adele). Before being a part of Semisonic, he was a member of Trip Shakespeare, whose long-haired psychedelia influenced a generation of Midwestern bands long after their breakup in the early 1990s.

Wilson has released four solo albums—his most recent, Re-Covered, was released this August—and has become a sought-after songwriting collaborator, perhaps because of his slow-drip brew of philosophic and artistic seriousness; dry Midwestern humor (well-known to live audiences); and songwriting, performing, and production skills. He has written or produced for a diverse group of artists, including John Legend, My Morning Jacket, Keith Urban, Spoon, P!nk, and Taylor Swift.