'Christmas Evil (You Better Watch Out!)' 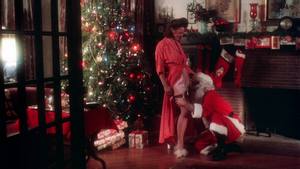 Harry Stadling (Brandon Maggert) is obsessed with Christmas! In fact he wants to “be” the authentic Santa Claus, with a real suit, sleigh and reindeer. Ever since he learned the “truth” about Santa, he’s tried to make Christmas a reality.

Growing up a toy maker, Harry is met with naysayers and critics who mock him for his yuletide beliefs… but he wants people to get the presents they deserve, even if that means giving the gift of murder!

Cynics and uptight hypocrites beware! Lewis Jackson’s classic black comedy horror film, Christmas Evil (aka You Better Watch Out!) is, according to cult film director/auteur John Waters, “the best seasonal film of all time. I wish I had kids. I’d make them watch it every year and, if they didn’t like it, they’d be punished!”