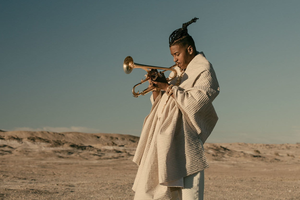 Heralded by NPR as ushering in “a new era in jazz,” Adjuah continues to forge new ground. JazzTimes cites him as "The architect of a new commercially viable fusion" and "Jazz's young style God.” In 2015, Adjuah released Stretch Music - the inaugural recording of Adjuah’s vision of genre blindness in sound. The trailblazing document centered around acculturating as many musical forms, vernaculars, and cultures as possible into one fresh and resonate creative improvised concept. The recording garnered Adjuah a Downbeat Critics Poll “Rising Star Composer” win in addition to many “Rising Star Trumpet” wins from the publication. Stretch Music was accompanied by a groundbreaking app by the same name, for which Adjuah won JAZZFM’s 2015 Innovation of the Year honor.

Christians current release, Ancestral Recall, continues Adjuah’s mission to unify people via their musical and cultural voices by tearing down the sonic and social constructs that separate them.