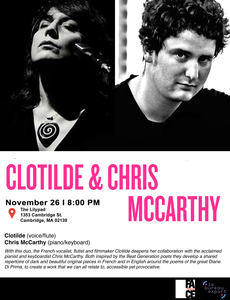 With this duo, the French vocalist-flutist and filmmaker Clotilde and the acclaimed American keyboardist Chris McCarthy deepen their New-York born collaboration.

Both influenced by the Beat Generation; they collaborate to develop a shared repertoire Pieces of a Song, of dark and beautiful original pieces in French and English, infused with the writings of the poetess Diane Di Prima.

To create a work that we can all relate to, accessible yet provocative, they intertwine their creative visions, where poetry meets hip-hop, spoken-word meets contemporary improvisation, and visual art meets pop music.

"There is no way out of the spiritual battle There is no way you can avoid taking sides There is no way that you can not have a poetics no matter what you do: plumber, baker, teacher You do it in the consciousness of making or not making your world" – Diane Di Prima, Ran

Bios:
Clotilde
Clotilde is an international vocalist and flutist. Her last album A woman’s journey won 16 awards including 4 awards as “Best album”. Her second album In Extremis was named one the top 5 albums by “NPR Annual Jazz Critics Poll” and by The Sunday Times. As a bandleader she performs at renowned jazz venues and prestigious festivals around the world. Her recent creation XXY [ɛks/ɛks/wʌɪ], a multidisciplinary music and motion artmovie has already received the Award for Best Emerging Vision.
https://www.youtube.com/channel/UCN24VUAs9xVcFOHOJC4t0ZQ
https://clotilderullaud.bandcamp.com


Chris McCarthy
HotHouseJazzMagazine described Chris McCarthy as “one of the most imaginative and impressive voices on the New York jazz scene.” Since arriving in New York, he has collaborated with established artists such as Jason Palmer and Lion Babe and with rising one like Sasha Berliner. McCarthy graduated with honors from the New England Conservatory in 2016. In 2017 he released his debut album Sonder, described by AllAboutJazz as “the promising and first release of many for this broad-minded and adventurous keyboardist.”
https://chrismccarthymusic.bandcamp.com

26/11/2019 20:00:00 26/11/2019 22:00:00 15 Chris McCarthy and Clotilde Duo - Pieces of a Song at The Lilypad With this duo, the French vocalist-flutist and filmmaker Clotilde and the acclaimed American keyboardist Chris McCarthy deepen their New-York born collaboration. Both influenced by the Beat Gene... The Lilypad, Cambridge, MA 02139 Organizer Organizer e-mail false DD/MM/YYYY Reddit