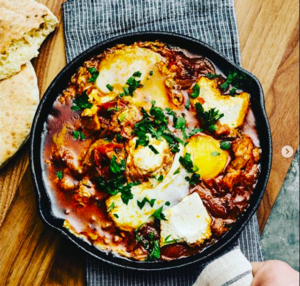 Some of Boston’s brightest young culinary talents join forces on Sunday, January 27 for a Simcha pop-up brunch at The Townshend in Quincy Center.

Chef Avi’s menu will include, among other options:

“Most Americans, when they think of Israeli or Jewish food, think only of Ashkenazi cuisine,” said Shemtov. “The classic dishes you find in the Jewish delis of New York or Brookline, brisket, matzah balls, bagels & lox. Sephardic food is quite a bit different and less well known here in America. It’s influenced by Turkish, Persian, Arab, Iberian and North African cuisine and culture.”

Simcha will be the region’s only fine-dining Sephardic restaurant. The intimate eatery will feature:

“My goal is to tell the global story of the Israeli people through my food, while highlighting the best in locally sourced New England ingredients,” said Shemtov, a first-generation Israeli-American of Turkish descent.

The Simcha concept was inspired by a successful series of Simcha pop-up brunches and dinners Shemtov hosted across Greater Boston in late 2017 and early 2018. He recently hosted a Simcha pop-up at The Swoop House in Austin, Texas.