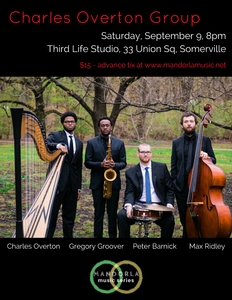 The Mandorla Music Series is excited to kick off our fall 2017 season with the Charles Overton Group!

Charles Overton is a Boston-based harpist and performer of classical, jazz and world music. He began his harp studies at the age of ten, and was afforded the opportunity at an early age to perform internationally in notable venues such as the Salle Gaveaux in Paris and Carnegie Hall's Weill Recital Hall. In 2009 Charles went on to attend the Interlochen Arts Academy, during which time he was a prizewinner in the Young Artist Harp Competition and was twice a finalist for the Interlochen Arts Academy Concerto Competition.

In 2012 Charles moved to Boston to attend the Berklee College of Music, where while continuing to study classical music under the direction of BSO principal harpist, Jessica Zhou, he also began to explore the world of jazz and other improvised musics more seriously. During his time at Berklee, he was a finalist in the 2013 American Harp Society National Competition and became the first harp student to be admitted to the Berklee Global Jazz Institute.

During summer 2017, Charles performed at the Tanglewood Music Center and released the debut Charles Overton Group recording, 'Convergence.' Charles will be joined by the musicians that appeared on the record: Gregory Groover on saxophone, Max Ridley on bass & Peter Barnick on drums.