Chameleon performs Messiaen's Quartet for the End of Time 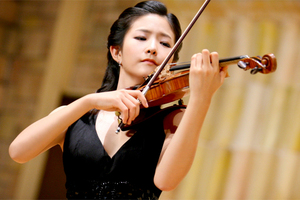 The critically-acclaimed Chameleon Arts Ensemble continues its fall chamber music season with “earthly echoes, celestial song” featuring Olivier Messiaen’s epic masterpiece, Quartet for the End of Time. The work’s origin is nothing short of miraculous. It was composed while Messiaen was a prisoner of war for the instruments on hand among the camp’s inmates – violin, cello, clarinet, and piano – and the premiere took place in an unheated barrack on January 15, 1941, before an audience of fellow prisoners and German officers. Overflowing with genius and invention, the Quartet stands as one of history’s greatest musical achievements, transporting us to a place between earthly suffering and the ecstasy of heaven, between measured time and boundless eternity, between sound and silence. It remains as powerful today as it was in 1941. Rounding out the program are Debussy’s exquisite Afternoon of a Faun for flute and piano; David Ludwig’s Pleiades for oboe and piano; and Haydn’s String Quartet Op. 76, No. 4 “Sunrise.”