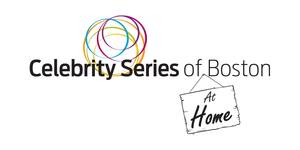 Celebrity Series at Home brings you live online concerts and events specially curated by our talented and inspiring Neighborhood Arts artists. Stay engaged with Celebrity Series artists so we can all remain connected to the joy of live performances. We hope to see you in one of our online events!

🎵 Shaw Pong Liu, violin
Friday, May 1, 8pm ET
Violinist and composer Shaw Pong Liu will perform a Facebook Live concert on Friday, May 1 at 8 pm. As a City of Boston Mayor's Office of Arts & Culture Boston Artist-in-Residence and Neighborhood Arts artist, she used songwriting and performances to support healing and dialogue around violence and racism.

🎵 Veronica Robles, voice and vihuela
Thursday, May 7, 8pm ET
Veronica Robles is a Mariachi singer by trade, but has become a cultural icon for Latinos in Boston. She founded the first all female mariachi band in Boston and is the co-founder and Director of the Veronica Robles Cultural Center, a non-profit organization that supports community action and economic growth in East Boston, offering Latin American arts and culture programs while also providing jobs for youth.

🎭 Jean Appolon, Movement Workshop
Thursday, May 14, 5:30pm ET
In addition to being the co-founder and Artistic Director of Jean Appolon Expressions (JAE), Jean Appolon is a successful choreographer and master teacher based in Boston and Port-au-Prince, Haiti. Appolon received his earliest training and performance opportunities in Port-au-Prince with the Viviane Gauthier Dance Company and the Folkloric Ballet of Haiti. Join him for a movement/power workout (medium exertion).

🎵 Michael Avitabile, flute
Thursday, May 28, 8pm ET
Michael Avitabile is a flutist, entrepreneur, and educator dedicated to the music of our time. He is the Founder and Executive Director of Hub New Music, a Boston-based mixed quartet that has quickly become a prominent force among younger contemporary music organizations.

🎵 Débo Ray, vocalist
Thursday, June 4, 8pm ET
Débo Ray, vocalist and founding member of Women of the World, believes that music has the power to transport us to another time and place. She harnesses that power with a broad audience of fellow music lovers and passionate musicians alike.

🎵 Maria Finkelmeier, percussion
Thursday, June 11, 8pm ET
Maria Finkelmeier is a percussion performer, composer, educator, and arts entrepreneur. She is co-founder and principal of MASARY Studios, a sound, light, and performance collective creating site-specific immersive experiences, and founder of Kadence Arts, a Boston-based non-profit which creates an eco-system of art making and learning through drumming.

🎵 Fabiola Méndez, cuatro
Thursday, June 18, 7pm ET
A prize-winning performer, Fabiola Mendez is the first Berklee College of Music student to graduate with the cuatro as her principal instrument. Join her as she plays songs from Puerto Rico and new works she's composed.