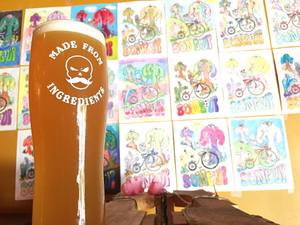 Brewers' Notes: When our friends at Original Gravity came to us talkin' talks about brewing another beer for another show, we said "heck yes!" and set about holin' up somewhere secluded with our Designated Piece playin' on repeat while we Searched for Inspiration and instead we (again) ended up with a passionately-written yet largely-illegible pages-long rambling screed that eventually kind of got around to describing the final beer (but, like, described as if the beer was a person applying for a job) and somehow we made that work and now here it is! It's a nice 'n' bright lil' delight that packs a whole buncha tropical nonsense into a small package and we predict you gon' enjoy the heck out of it!