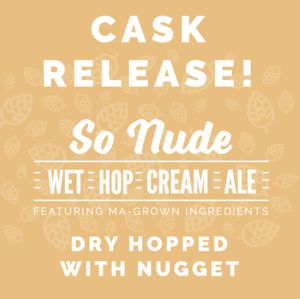 Brewers' Notes: Ever since the dawning of our first brewday, we have yearned to brew a wet hop beer (or a fresh hop ale or whatever the hell you wanna call it). And ever since we learned it was a possibility, we've also sought to brew a version of Extra Naked using entirely locally grown ingredients. And so, on the eve of The Harvest, we decided to combine those two ideas and make them as one. Two birds, one delicious stone.

More to the point, we got a buncha fresh-off-the-bine Pepite from our friends at Four Star Farms, plus some local barley and corn from Valley Malt and we brewed up a new spin on an old favorite! And though it is based entirely on the Extra Naked recipe, it turns out that if you replace all the ingredients with different ones you get an entirely different beer! Who woulda thunk? So Nude has a floral, spicy aroma that's backed by a big ol' (figurative) slab o' cornbread, and finishes slightly on the sweet side. It's perfect for harvest season (and even better if you're harvesting meats off a hot grill).