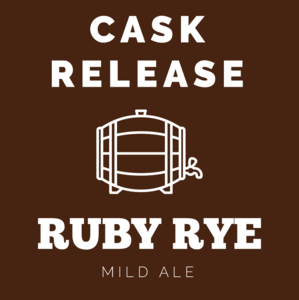 Nothing goes better together than good ol' beer and pretzels! Every Thursday we serve up heapin' Sicilian slices from Sillari's Pizza in Malden alongside a limited cask beer release.

Beer Name: Ruby Rye
Style: Mild
ABV: 4.3%
IBU: 22
Color: We were shooting for a nice deep red, but apparently we're bad at colors because this is about as brown as you can get.

Cheese Pairing: Young Manchego.
Food Pairing: Elk jerky.
Music Pairing (Jimbo's Choice): "Reason to Leave" by Hillstomp
Music Pairing (Jared's Choice): "One Hit Two Hit" by Red Fang.
Best Occasion to Drink: When your beach day just got rained out but you were already primed to be lazy as heck all day anyway

Brewers' Notes: Even though the warm days are approaching and that's the season for light 'n' airy summer beers, we like to mix it up with something a little more towards the middle of the beer color spectrum. And, almost as importantly, we've been doing casks for months and have somehow managed to neglect the old-skool English styles that are so closely tied to cask. And also we like rye. Three birds, one stone. Boom.