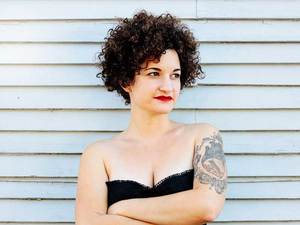 The warning – or call to (dis)arms – segues into the first notes of “Twister.” Finger snaps alone accompany Blanton’s smoky vocals, before piano, upright bass, cello, trumpet, and drums join the proceedings. You’re immediately drawn in to her riveting tale of natural – and erotic – disaster. Brimming with catchy hooks, sensual vocals, and lyrics boasting a gift for rhyme and meter, Buck Up is Blanton’s melodic mandate for survival following the 2016 presidential election: passion, lust, and humor. “There are two themes on this record,” says Blanton of Buck Up’s ten electrifying tracks. “One is the feeling of catastrophe happening in American politics, and the other is this feeling of personal catastrophe”: when you fall for “That Boy,” for example, a reckless wild child, the type who populate her life and imagination. Though Buck Up may be “basically about being depressed,” according to Blanton, “if there’s not a sense of humor or playfulness, I don’t want to listen to it. Music is about play.”
Over the past dozen years, Blanton has been making music that personifies play. Her work has been called “impeccably catchy” by critic Robert Christgau, with musician John Oates admiring her songs’ “sly wit and urbane imagery” that remind him of Cole Porter. She’s toured across America and Europe sharing stages with Madeleine Peyroux, The Weepies