Burn Boston Burn: the Largest Arson Case in the History of the Country 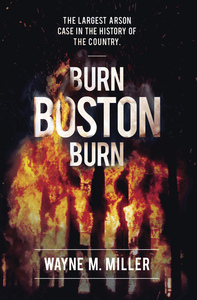 "Burn Boston Burn: the Largest Arson Case in the History of the Country." Book presentation given by author and former ATF Federal Agent Wayne M. Miller. Hosted by the Friends of the Charlestown Branch of the Boston Public Library.

"Burn Boston Burn" is a true story, of a deep conspiracy developed and executed by nine men, including three Boston cops and a Boston firefighter, all determined to wreak havoc on the city and surrounding communities. It is also a story of the relentless investigators who eventually uncovered their plot.

In the early 1980s, Boston was set ablaze, coincidentally not long after tax-cutting measures caused the layoffs of hundreds of police and firefighters. Over the course of two years, these “fire buffs” turned arsonists, were on a mission to keep the area ablaze with nightly multiple-alarm fires, with sirens wailing through the streets, and people too afraid to sleep. Two hundred sixty-four buildings were set on fire, resulting in millions of dollars in damages and hundreds of injuries.

Told from the perspective of Wayne M. Miller, the head ATF Special Agent in charge of the investigation during that time, "Burn Boston Burn" is a horrendous tale of political deceit and internal corruption. The book details the series of crimes that shook the city of Boston and became known as one of the largest arson cases on record in the history of the country.