Bugs Bunny at the Symphony II 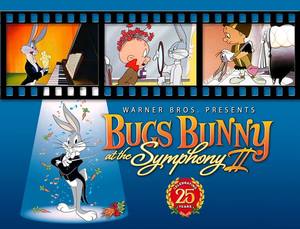 Acclaimed as the master of animation music, Stalling's soundscapes take audiences on a roller coaster ride of rhythm, melody, and harmony, inspired by the great works of Wagner, Rossini, Johann Strauss, von Suppe, Smetana, and other great composers. Conducted by George Daugherty and created by Daugherty and David Ka Lik Wong, Bugs Bunny at the Symphony II spotlights such iconic classics as "What's Opera, Doc?", "The Rabbit of Seville", "Rhapsody Rabbit", "Long-Haired Hare", "Show Biz Bugs", "Baton Bunny", and many others . . . plus two brand-new, critically-acclaimed 3D cartoons from Warner Bros. Entertainment - "Rabid Rider" and "Coyote Falls". And capping it all off are special guest appearances by Tom & Jerry in the Hollywood Bowl. Bugs Bunny at the Symphony II is the latest incarnation of a concert project which has been receiving standing ovations and rave reviews around the world for the past 25 years, starting with the original versions, Bugs Bunny on Broadway (1990), and Bugs Bunny at the Symphony (2010). The three concerts have played to over 2.5 million cheering audience members worldwide.

These classic Looney Tunes cartoons will be screened with live orchestral accompaniment.