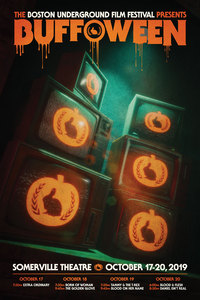 For the first time in its 22 year history, the Boston Underground Film Festival is launching a mid-year mini-fest to bring a selection of seasonally appropriate thrills and chills to New England cinephiles! Marking the midway point between 2019’s BUFF and the upcoming festival in March 2020, the weirdos behind BUFF are teaming up with the historic Somerville Theatre in Davis Square to bring you the first-ever edition of “BUFF-o-WEEN” this October!

Showcasing six feature films plus an incredible block of short films currently slaying genre audiences around the world, BUFF-o-WEEN seeks to expand on the festival’s annual offerings of bizarre and insane programming into the holiest of New England holiday seasons.

“For a long time we’ve thought about creating space for contemporary horror and genre film in the Boston area in October; the city has incredible repertory programming and marathons this month and we wanted to bring a little something different to film fans in the area to celebrate the Halloween season,” said BUFF’s Artistic Director, Kevin Monahan. “As a programmer, it’s a dream come true to bring even more fantastic films to Boston for some big-screen love from our incredible community of film fans and filmmakers,” said BUFF’s Director of Programming Nicole McControversy.

Opening this inaugural series of spooky and sublime delights is hilarious and charming paranormal comedy Extra Ordinary, by Irish writer/director dynamos Enda Loughman and Mike Ahern. Courtesy of our neighbors to the North, we’re thrilled to present “Born of Woman,” an epic block of international short films helmed by women directors, curated by Fantasia International Film Festival’s head programmer Mitch Davis. Also hot off its recent Fantasia premiere, we have director Matthew Pope’s tense, southern gothic thriller Blood on Her Name while the horrifying story of Germany’s most notorious serial killer is brought to life in Fatih Akin’s The Golden Glove.