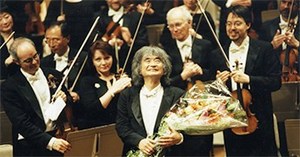 Seiji Ozawa led his final concerts In Symphony Hall as BSO Music Director in April 2002. His 29 years as the BSO’s leader was the longest in its history, surpassing even Serge Koussevitzky’s legendary tenure. After stepping down from his BSO position, Maestro Ozawa was named the orchestra’s Music Director Laureate – a title he still holds.
Strong emotions are palpable in this farewell performance as Ozawa takes the stage. After greeting the musicians, he gathers himself briefly before turning to face the audience, which rises to a standing ovation before the performance begins. Famous for conducting from memory with his score closed on the music stand, Ozawa conducts as though dancing, his movements expressively elegant. Time seems suspended in the finale, which features some of the most moving music in the symphonic repertoire.

Ozawa’s strong connection to Mahler is well documented in his recordings with the BSO of the composer’s complete symphonies. He chose the Ninth Symphony for his final concerts as music director in part for its famously valedictory mood. Mahler was very much aware of his own mortality when he began the symphony in 1909 and completed it in April 1910, a few months before his 50th birthday. It was the last piece he finished. Although in its opening movement and finale the symphony seems to contemplate mortality as well as what lies beyond death, the second and third movements delve deeply into the energy, humor, and sweetness of life.

Stream the concert here for a limited time: https://youtu.be/g2c7BbbVmkk

SUPPORT THE MUSIC
Although we are not performing from stage, the BSO remains committed to sharing inspiring music with all who wish to hear. Your gift makes this possible and ensures we’ll be ready to welcome you back once we open our doors again.