Breaking Into the Film Industry: Professional Networking and Panel 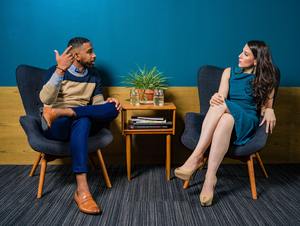 Nervous about starting a career in movies? Already working in film but need some guidance? RoleHatFilm Collective will be hosting a networking event for creatives just beginning their journey into the field. Stop by after work for some light refreshments and a chance to meet other local filmmakers. Along with networking we will be featuring three guest speakers: Nicky Weinstock of Red Hour Films , Laura Azevedo the Executive Director and Film Festival Director of the Filmmakers Collaborative and Jae M. Williams of the Social Justice Center at Emerson College. They will be speaking on their journeys as filmmakers and provide advice to beginners.

Price: Donation of 10$. Vemno payments will be accepted at the door. Proceeds will be going towards designing a new logo for the Rolehat Film Collective as well as covering costs for the event.

Nicky Weinstock is a partner at Red Hour Films, where he oversees all films, television projects, and digital ventures of the expansive creative company along with partner Ben Stiller. Prior to working at Red Hour, Nicky has held numerous positions in the Los Angeles area, including President of Invention Films, Founder and Director of the Fox Writers Studio, and Head of Development at Apatow Productions.

Laura Azevedo has over twenty years experience as a production manager and supervising producer, with credits on national series such as NOVA, American Experience and FETCH! with Ruff Ruffman. In her tenure at FC she has positioned the organization as one of the few non-profit fiscal sponsors able to handle both traditional and crowd-sourced funding in an easy and streamlined fashion — a huge asset to FC filmmakers as they increasingly turn online for project funding. She manages all strategic planning for the Collaborative, and is interested in implementing further networking and educational opportunities for the independent media-making community. She is co-creator and current director of the Boston International Kids Film Festival.

Jae M. Williams is a content creator, strategist and educator with expertise in integrated marketing communication strategies, media and film production. His past includes managerial and leadership experience with a deep understanding of ever-changing social trends in communication technology. His training and facilitation experiences include adjunct professorial roles, workshop instructor and public speaker on topics of arts education, diversity in media, and social justice and advocacy in film and television. He is currently the Director of Special Projects at the Social Justice Center at Emerson College.

Thank you to our host The Video Creators Lounge! Please check out their website for their extensive offerings of services for local media productions: https://www.videocreatorslounge.com. Questions? rolehatfilm@gmail.com

03/12/2019 18:30:00 03/12/2019 21:30:00 15 Breaking Into the Film Industry: Professional Networking and Panel Nervous about starting a career in movies? Already working in film but need some guidance? RoleHatFilm Collective will be hosting a networking event for creatives just beginning their journey into ... video creators lounge, melrose, massachusetts 02176 Organizer Organizer e-mail false DD/MM/YYYY Reddit