Bravo! Brava!: Gender, Opera, and The Marriage of Figaro 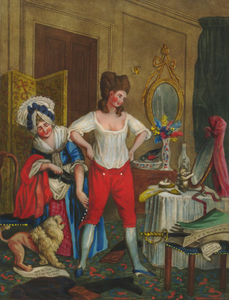 The opera stage is a place of play and possibility, especially when it comes to the rules of gender. Women often portray men—or even depict men pretending to be women—delighting audiences with inversions and transformations that titillate, amuse, and often illuminate greater truths. Dr. Laurence Senelick, professor, actor, director, and author of the leading study of stage cross-dressing, delves into the rich tradition of gender-bending on the operatic stage, illustrated through musical examples performed by Boston Lyric Opera artists. With a central focus on the hilarious and poignant Cherubino scene in Mozart’s "The Marriage of Figaro," this performance will survey the men and women of the operatic stage from the eighteenth century through the twentieth—in all states of dress.

The evening will include performances of selected scenes from Mozart’s "The Marriage of Figaro" (opening at Boston Lyric Opera this April), Handel’s "Partenope," and Strauss’ "Der Rosenkavalier."

Boston Lyric Opera is the largest and longest-lived opera company in New England, with a mission to build curiosity, enthusiasm and support for opera by creating musically and theatrically compelling productions, events, and educational resources for the Boston community and beyond. Since its founding in 1976, the company has staged world premieres, US premieres, co-productions, and co-commissions of note with organizations such as the Royal Opera, Covent Garden, and the Scottish Opera, and it continues to be a destination for some of the leading artists, conductors, directors, and designers from around the world.

Registration begins March 1 at 9 am.