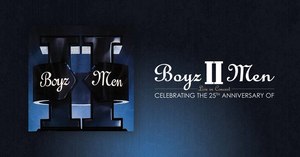 These sons of Philadelphia are enjoying this 25th anniversary year, working with the same drive and positivity evident when their debut album for Motown Records, Cooleyhighharmony, was first released in 1991. The only difference is that these days, the reach of the Boyz extends far beyond the charts, whether that’s playing with symphony orchestras or appearing on TV, duetting with country music stars, or welcoming delegates to one of America’s major political events.