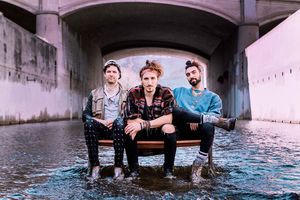 Inside a redwood tree off the coast of California, within a tunnel by Snoqualmie Pass, on an airstrip in Marble, Colorado, in a wild daisy field near Crested Butte—these are just a few of the places Los Angeles trio MAGIC GIANT recorded their debut album, In the Wind. Austin Bisnow (lead vocals), Zambricki Li (banjo/violin/harmonica), and Zang (acoustic guitar, cello), welcomed nature into the fold as their unofficial fourth member.

“It was fate,” recalls Li. “We were scheduled to play all these festivals—Electric Forest, Wanderlust, Lightning in a Bottle—that just so happened to be in really beautiful parts of the country.” During the spring of 2016, the boys bought a shuttle bus, converted it into a solar-powered mobile recording studio, added a California King on hydraulics, and fondly named her Queen Elizabeth. “There were spaces of time between shows where we could get creative,” says Zang. “Using the bus to power microphones, we recorded outside—literally In The Wind—across North America.”