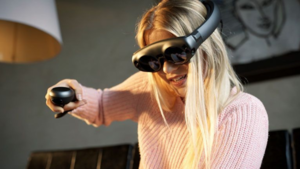 Come join the local XR community as we share our best work and ideas. We'll have a series of lighting talks (10 minutes each), demos, and pizza!

GESTURALLY INTERACTIVE MUSIC
Gregory Osborne (Berklee) will discuss the new possibilities of using your body and in particular hand gestures to direct both visual and audio systems, opening up the possibility for gesturally interactive music videos.

VR RACING SIMULATORS
Robert Moore (VR Motion Labs) will talk about VR racing simulators for sim racing and race driver training and race preparation. I’m currently working with the Porsche Club Of America on their eDE (electronic Driver Education) program. I do this in my Plymouth MA based 3DOF motion simulator, in VR with a Pro level instructor who is in his simulator in New York. We schedule shared private iRacing sessions where our 2 cars on on the same track and I can follow him, he can follow me or I can jump in his car or he can jump in mine. We’re discussing the track, the race line, the braking points, etc. as he brings me up to speed on the track. It’s a new initiative by the PCA and it is a very effective way to bring new drivers up to speed on the track with other drivers.

MICROTASKING IN VR
Casey Armstrong will talk about what could happen, hypothetically, if microtasking platforms came to VR in the future and why he thinks developers should start experimenting now. What is microtasking? Microtasking is work done in bite-sized chunks on platforms like Mechanical Turk, Swagbucks, and Fold.it. Microtasks can come in any form. However, in their most popular forms, microtasks range from labeling-and-cleaning data for data-science, to writing short product-descriptions, to answering surveys, to playing video games that train AI.

WRAPVR
John Joseph will talk about wrapVR; a lightweight toolkit that abstracts the specifics of VR SDK / hardware interaction in Unity, making it easier for developers to start creating interactions and behaviors in VR.