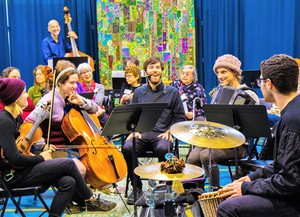 Join the circle around Zach Mayer for an evening of original Jewish melodies, rooted in tradition yet filled with the spirit of the new millennium.

From the time he was a little boy, sitting around the candlelit Sabbath table with his stepfather, Rabbi Sruli Dresdner, Zach absorbed the wordless melodies, and, at KlezKanada helped lead hundreds of people of all ages in the most beautiful and traditional nigunim. Some melodies were contemplative, some had everyone banging on the table. And some had everyone dancing on the table.

With a Master's Degree from the New England Conservatory of Music, and 7 Million hits on YouTube for his Subway Sax Battle, Zach brings you into his new/old musical world, one heartbeat at a time.

Open to the public. Snacks and drinks provided. Suggested $10 donation at the door.