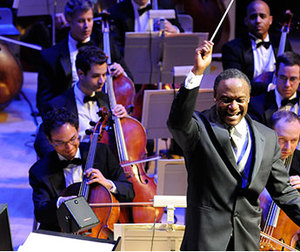 In response to the Boston Symphony Orchestra’s cancellation of its four-city tour to East Asia (Seoul, Taipei, Hong Kong, and Shanghai), which was to have taken place February 6–16, the management of the orchestra has added to its performance schedule a series of free musical offerings that will culminate in a Boston Symphony Orchestra community concert, under the direction of Thomas Wilkins, BSO Youth and Family Conductor, on Sunday, February 16, at 3pm, at Symphony Hall in Boston. Leading up to this concert will be a series of free pop-up concerts featuring members of the BSO that will take place throughout Greater Boston, February 9–14.

The Thomas Wilkins-led BSO performance, Concert for Our City, will feature a wide-ranging program including works by Tchaikovsky, Ginastera, and Brahms. The program will also include Chinese composer Huang Ruo’s Folksongs for Orchestra, George Walker’s Lyric for String Orchestra, and the finale of Dvorák's Cello Concerto with cellist Sterling Elliott, the 2014 winner of the Sphinx Competition.
Complimentary general admission tickets can be reserved here, or by calling Symphony Charge at 617-266-1200.