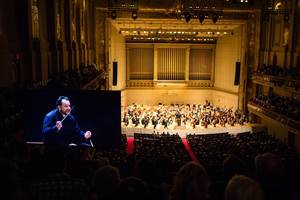 Associate Principal Trumpet Tom Siders will open the prgram with remarks from the stage.

French conductor Alain Altinoglu, making his BSO debut, leads this all-French program and is joined by his countryman, the violinist Renaud Capuçon, for Édouard Lalo's "Symphonie espagnole", written for the great Spanish virtuoso Sarasate in 1874 and a brilliant concerto in all but name. Berlioz's "Le Corsaire" Overture, by turns romantic and exuberant, opens the program. Albert Roussel's Suite No. 2 from his 1930 ballet "Bacchus et Ariane" was strongly championed with the BSO by Charles Munch.

The Conductor Cam seating allows patrons to watch the conductor from the orchestra's perspective. Screens will be placed in front of these sections.