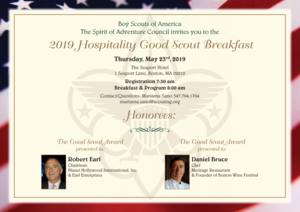 The Boy Scouts Spirit of Adventure Council will host the 2019 Hospitality Good Scout Breakfast at the Seaport Hotel in Boston. This event brings leaders of Boston’s hospitality industry together to support the Boy Scouts and its career-focused youth development programs that inspire and prepare Boston’s young men and women to seek careers in the hospitality industry. The Boy Scouts will honor Daniel Bruce, Chef at Meritage at the Boston Harbor Hotel and founder of the Boston Wine Festival, and Robert Earl, Chairman of Planet Hollywood International, Inc. and Earl Enterprises. The honorees will be presented with the “Good Scout” award for their contributions to Scouting and Boston’s thriving hospitality industry.

Bruce is an internationally renowned chef and entrepreneur. A native New Englander, Bruce graduated with honors from Johnson & Wales University. He further expanded on his training in Italy and France and became the youngest Executive Chef at the famed 21 in New York City. In 1989, Bruce arrived at the five-star Boston Harbor Hotel and founded the Boston Wine Festival, the nation’s longest-running food and wine paring series.