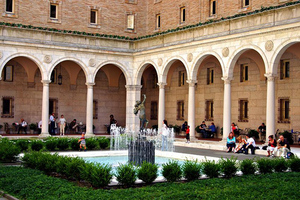 June 14 | Francesca Crowley
Francesca Crowley is an American modern folk singer-songwriter. She has performed in the Los Angeles area including at the Playa Vista Farmers Market and Republic of Pie as well as locations in Greater Boston such as Cafe 939. Francesca’s influences include songwriters such as Stevie Nicks, Norah Jones, and Joni Mitchell, and she strives to create new and different music inspired by her life.

June 21 | Maro Maro
Maro Maro is a singer-songwriter, pianist, and guitarist from Lisbon, Portugal. She began studying music at the age of four and received her conservatory piano diploma and a high school certificate in science and technologies at the age of 19. Currently studying at Berklee College of Music, Maro is getting ready to record her first album for release by the end of the year.

July 5 | Brandon Diaz
Brandon Diaz is an accomplished vocalist, songwriter, and musician from Ashburn, Virginia. While studying at Berklee College of Music, he has become an integral part of a young and vibrant musical community in the Northeast. Diaz combines a captivating and soulful voice and exceptional musicality with exemplary showmanship and professionalism.

July 12 | Samuel Batista
Panamanian saxophonist Samuel Batista began playing at age 14. He later joined the Danilo Pérez Foundation and is currently continuing his studies at Berklee College of Music. He works as a bandleader of his trio with Noam Israeli (drums) and Rob Taylor (bass). They perform around Greater Boston and are in the process of recording their music.

July 26 | BEARD
BEARD is a seven-piece progressive folk band that comes from the heart of Boston. As musicians raised in the legacy of Berklee College of Music, their primary purpose as BEARD is to impact their audience through genre-defying progressive folk, fusing together traces of jazz, Americana, classical, R&B, and rhythms influenced by world music. BEARD’s lyricism and instrumental precision finds its inspiration from greats like Joni Mitchell, Bob Dylan, and Radiohead.

August 2 | Harshitha Krishnan
Harshitha Krishnan is a performing and recording artist of Indian origin from Lagos, Nigeria. With her strong background in Western classical music, she branched out into soul, R&B, jazz, world music styles, and alternative, creating her own unique sound fusing Indian and contemporary Western elements. Her band Harshitha + Friends presents a wide range of popular Indian songs arranged by Krishnan as well as her original compositions.

August 9 | Sleeping Lion
The Boston-based lurid indie pop duo Sleeping Lion was formed by roommates Nate Flaks and Noah Longworth McGuire in the spring of 2015. The first Sleeping Lion songs were written and produced remotely the following summer via Skype, while Nate was living in Dobbs Ferry, New York, and Noah was living in Rome, Italy. In the fall, the two came together to record in Quincy, Massachusetts. Their first single, “You Made Me,” was released in September 2015 and quickly generated hype around Boston. Sleeping Lion is currently playing shows in Boston and New York City, and they are expecting to release new music in the near future.

August 23 | Abby Carey
Abby Carey is a 20-year-old singer-songwriter from North Attleboro, Massachusetts, whose influences range from Bruce Springsteen to The 1975. She started writing songs on her dad's old guitar when she was 11 years old. Her songs are a combination of catchy pop hooks and honest, raw storytelling.

August 30 | Amber Olivia Kiner
At the age of two, Amber Olivia Kiner started singing in her grandfather’s Missionary Baptist church. Her deep love for soul and R&B sparked her inspiration to begin writing her own music as a teenager. When she was 15 years old, Kiner performed on the BET Stellar Awards behind Memphis gospel recording artist Earnest Pugh. In the fall of 2014, she began studying at Berklee College of Music. She has recently shared the stage with the Beyoncé Original All Female Band at the Berklee Performance Center, singing alongside Beyoncé’s background vocalist Chrissy Collins and dancing with Ebony Williams, Beyoncé’s original dancer from the “Single Ladies” video. Kiner’s debut EP was released in late March 2017.