BOSTON OCCUPIED: The Landing of British Troops in Boston 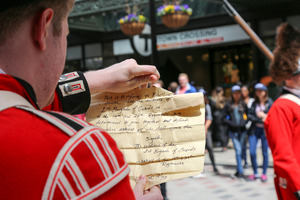 In October of 1768 the British government sent troops to Boston to help Governor Francis Bernard quell the violence and unrest that had been going unchecked since the passage of the new customs duties known as the Townshend Acts, and the people’s decision to stop importing goods from Great Britain. Far from quieting the town, the arrival of the troops marked a significant escalation of tension and violence that would lead to the Boston Massacre in 1770 and widen the rift between the British Parliament and the people of the Province of Massachusetts Bay.

On October 6 and 7, 2018 Revolution 250 will stage a reenactment of the arrival of the British regular troops. This is intended as a signature event of Revolution 250, a consortium of organizations working together to commemorate the 250th anniversaries of the events that led to American Revolution. Redcoats will land at Long Wharf on the morning of Saturday, October 6 and parade through the city, past the Old State House and through Downtown Crossing, en route to Boston Common, where they will set up an encampment and spend the night on Boston Common.