Boston Looks Seaward: A History of the Port of Boston 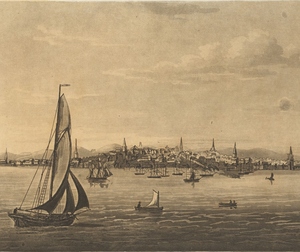 Nestled between the granite face of Cape Anne and the beckoning finger of Cape Cod for nearly 400 years Boston has set her face to the sea. William M. Fowler, Jr explores the evolution of the city's relation with its oceanic neighbor. First came the fishermen and explorers, next arrived the settlers and immigrants. In the nineteenth century in his East Boston yards, Donald McKay built clipper ships whose sailing records have yet to be broken. Today Boston continues to look seaward as we embrace our maritime heritage.

William M. Fowler, Jr. is the former director of the Massachusetts Historical Society, consulting editor at The New England Quarterly, and honorary professor of history at Northeastern University. His books include Steam Titans: Cunard, Collins and the Epic Battle for Commerce on the North Atlantic; Silas Talbot Captain of the Old Ironsides; Under Two Flags: The Navy in the Civil War; Jack Tars and Commodores: The American Navy, 1783-1815 and several other books on maritime and US history.