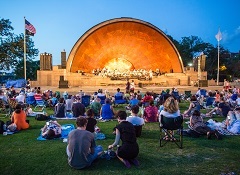 The Boston Landmarks Orchestra was founded in 2001 by conductor and community advocate Charles Ansbacher. The orchestra is comprised of many of the area’s finest professional musicians. Since 2007 when the orchestra established a regular concert series at the DCR’s Hatch Memorial Shell on the Esplanade, audiences have grown rapidly. We now host thousands along the banks of the Charles every Wednesday from July 19 through August 23.

July 19
Music for a Summer Evening

August 9
Anthems of the World