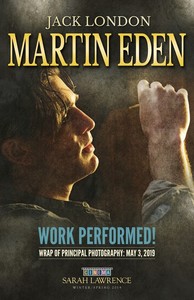 Join the Boston Public Library in partnership with the Boston Film Festival for a screening of and discussion about Jay Craven’s new independent narrative feature film Jack London’s Martin Eden.

This program will take place in the Rabb Lecture Hall on the Lower Level of the Johnson Building of the Central Library in Copley Square. Registration is required. COVID-19 health and safety protocols will be in place. To register, visit our calendar entry: https://bpl.bibliocommons.com/events/61378cc2860f473a005dac82.

Jack London was America’s most popular writer at the turn of the 20th century, having written stories including Call of the Wild and White Fang. His novel Martin Eden inspired Ernest Hemingway, Susan Sontag and Upton Sinclair, among others. Italian filmmaker Pietro Marcello recently made another adaptation of the story that has been well received. “We were surprised to see an Italian version being made simultaneously,” Craven noted. “Although I like Marcello’s stylistic approach and it gives audiences a chance to compare notes on both films and dig deeper into the story and its cultural context.”

In a statement about making the film, Craven writes, "London’s Martin Eden reverberates today, as so many struggle with formulating lives and identities that are tempted by their version of the dream and the hard work to achieve it, while simultaneously plagued by the inconstancies of class, money, race, gender and love. For Martin, this journey is further complicated by the long odds artists face, working outside the commercial mainstream and feeling unrecognized, even (or, maybe, especially) by Ruth."

Martin Eden is played by Andrew Richardson, who trained at Carnegie Mellon and London’s Royal Academy of Dramatic Art and Royal Academy of Dance. His credits include eight film and television productions, including Killer Among Us, and A Call to Spy—along with theatrical stagings of Taming of the Shrew and Othello.

Ruth Morse is played by Hayley Griffth, who also acted in The Mysteries of Laura, Satanic Panic, Law and Order, and Bull.

Lizzie is played by Annet Mahendru, who is best known for her co-starring role as Nina Krilova, the U.S. Russian embassy operative who has a love affair with FBI agent, Stan Beeman, in the long-running Emmy-winning series, The Americans. She also co-starred as Elena Evanovich in the Amazon series, The Romanoffs.