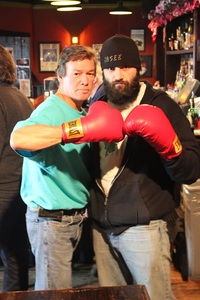 This January, The Rockwell will host “Boston Crime Scenes,” a three-act musical paying tribute to Hollywood cult classics with Massachusetts roots. Set to Irish music, the musical will pay homage to flicks such as “Once,” “The Departed,” “The Town,” “Mystic River,” “The Fighter,” “Boondock Saints,” “Ray Donovan,” “Good Will Hunting,” “The Thomas Crown Affair” and “The Friends of Eddie Coyle.”

In this story, the cast of iconic characters from each production frequently convene at a South Boston pub, but when the local haunt loses its liquor license and the head mob boss goes missing, the characters go on a crime spree throughout town. After extorting local politicians, clergy and members of the community, the criminals will eventually have to face their demons.

Written and directed by Pete Holm (“The Fiddlers of Inishbofin”, “Another Fiddler of Inishbofin,” and “Man of Iniskeen’s Green Journey”) and based on the screenplay, “Khaki’s Back,” by Holm and Ben Wright, the musical will feature an array of local musicians. This musical also pays tribute to the Irish band, The Pogues, on the 30th anniversary of their iconic album, “If I Should Fall From Grace With God.” The musical will feature songs such as “Galway Races” (a nod to the late founder of The Rockwell, Ken Kelly, who frequented and loved the races) and “The Band Played Waltzing Matilda.”

Tickets available online and at the door, as available.