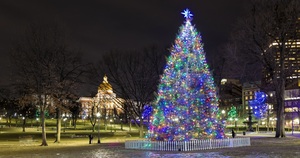 Join us, City of Boston, together with the Province of Nova Scotia to celebrate the 80th Annual Boston Common Tree Lighting on Thursday, December 2 from 6pm to 8pm at the Boston Common.

The official holiday season kick-off in Boston includes the lighting of the City of Boston's official Christmas tree and trees throughout Boston Common and the Public Garden. Generations have enjoyed and continue to treasure Boston's tree lighting celebration. Twenty-five thousand people of all ages attend the event, which has grown to include a festive stage show with nationally known talent. Join us in the countdown as the Mayor illuminates Boston's official tree and trees on Boston Common and the Public Garden bridge.

Before the lighting, be sure not to miss the Frog Pond Ice Skating Spectacular at 5pm.

The celebration is presented by the Boston Parks and Recreation Department, title sponsor The Province of Nova Scotia, and additional sponsors. The holiday lights throughout both parks will light up in sequence shortly before 8 p.m. when the Mayor is joined onstage by members of the Royal Canadian Mounted Police, Santa Claus, Rudolph, and Frosty. The show will close with a pyrotechnic display by Atlas PyroVision.

The lighting of the trees on the Common is made possible through the generosity of sponsors and contributions from other individuals and institutions. The annual holiday display includes the official Christmas tree from Nova Scotia and trees throughout Boston Common. Refreshments and additional support will be provided by promotional sponsors TBD.

This is the 50th year that Nova Scotia has given a tree to the people of Boston as thanks for relief efforts following the December 6, 1917, explosion of a munitions ship in Halifax Harbor. Within 24 hours of the disaster a train loaded with supplies and emergency personnel was making its way from Boston to Nova Scotia. For more information, please call 617-635-4505. Check out the Boston Common website for parking information.

On December 6, 1917, two ships collided in the Halifax harbor causing a devastating explosion which killed nearly 2,000 people and left hundreds more severely injured and homeless. Nova Scotia will never forget the support Boston provided, and to say thank you, the province will once again give the people of Boston the gift of a beautiful Christmas tree. For decades, this tradition has honored the kindness Bostonians offered Nova Scotians in our time of need. This year marks the 101st anniversary of the explosion.