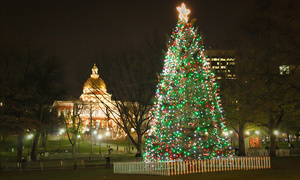 This is the 46th year that Nova Scotia has given a tree to the people of Boston as thanks for relief efforts following the December 6, 1917, explosion of a munitions ship in Halifax Harbor. Within 24 hours of the disaster a train loaded with supplies and emergency personnel was making its way from Boston to Nova Scotia.