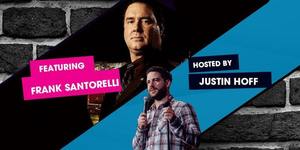 Join The Boston Comedy Festival at the Semi Final round of a nationwide stand-up competition. Ninety-six, bright-eyed comics from all over the country compete for $10,000 dollars in prize money. When it's over, there will be one comic standing with a nice little bag of money and a ton of bragging rights.
Hosted by: Justin Hoff
Justin Hoff was a finalist in the Boston Comedy Festival and the Last Comix Standing competition. He was also voted "Funniest New Comic on the East Coast" by Mohegan Sun Casino. Justin's observational and sometimes sarcastic comedy style transcends age and gender demographics alike. This versatility has given him the opportunity to work with legendary comedians such as Steve Sweeney, Nick DiPaolo, and Gilbert Gottfried; as well as a new generation of comedians including Jessimae Peluso, Carly Aquilino, and Chris Distefano
With Special Guest: Frank Santorelli
FRANK IS AN ITALIAN-AMERICAN WHO IS BEST KNOWN FOR PLAYING THE RECURRING ROLE OF "GEORGIE THE BARTENDER" IN THE SOPRANOS. FRANK IS ALSO WELL KNOWN FOR HIS STAR ROLE IN THE GODFATHERS OF COMEDY.