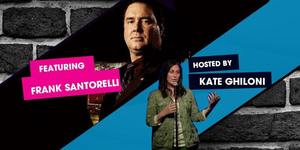 Join The Boston Comedy Festival at the Preliminary round of a nationwide stand-up competition. Ninety-six, bright-eyed comics from all over the country compete for $10,000 dollars in prize money. When it’s over, there will be one comic standing with a nice little bag of money and a ton of bragging rights.
Hosted by:
Kate’s comedy is bright and thoughtful. Her honesty with herself and others shines a light into the darkness around us and within us in a pointed, yet joyful way.
Kate has been featured in festivals across the country, including the Limestone Comedy Festival, Laugh Your Asheville Off, the Seattle International Comedy Competition, Laughing Skull, Boston Comedy Festival, Out of Bounds in Austin, and more.
As a writer, Kate’s work includes The Washington Post, People Magazine, and KickinKitchen.TV, a comedy-cooking webseries.
Kate has trained at The Second City (Chicago) and Improv Asylum (Boston).
With Special Guest: Frank Santorelli
FRANK IS AN ITALIAN-AMERICAN WHO IS BEST KNOWN FOR PLAYING THE RECURRING ROLE OF “GEORGIE THE BARTENDER” IN THE SOPRANOS. FRANK IS ALSO WELL KNOWN FOR HIS STAR ROLE IN THE GODFATHERS OF COMEDY.
Doors at 6:30pm