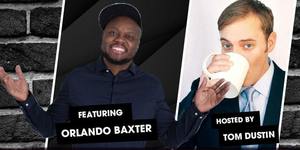 The Boston Comedy Festival is holding it’s 18th annual Stand Up Comedy Contest and you will not want to miss this preliminary round! Watch and cheer for 12 of the best stand up comedians from around the country compete for a $10,000 grand prize. Be there to support your favorite!
Hosted By: Tom Dustin
I’m from Boston and I do stand-up comedy for a living. I’ve won a few competitions including a big one in Canada which was televised in 2010 on “The Comedy Network” (Canadian Comedy Central) and paid me $25,000 that I quickly squandered. I’ll always love you, Canada.
Comedy Central in the U.S. picked me for the “Up Next” certified club talent search in 2013, but has yet to put me on their network. What gives? I love you guys, but come on. My parents are gonna die before they get to see me do standup on American television and I’m gonna be sad about it. You have the power to prevent that. I’ll be waiting by the phone, expecting your call.
I love working at comedy clubs, and I’m really good at it, which is probably why they all keep asking me back every year. By the way, thanks for that, comedy bookers. I love you too.
With Special Guest: Orlando Baxter
Orlando Baxter exploded onto the Boston comedy scene in 2005, and was quickly established as one of the areas hottest young comics. His fresh perspective and unique relatability soon made this former high school teacher a fan favourite and led to a string of finalist positions in a host of contests and festivals including The New York Comedy Contest, NBC’s ‘Stand Up for Diversity’, The Boston Comedy Festival, and The Montreux Comedy Festival in Switzerland. In 2012 he toured across the U.S. with national headliner Jo Koy, as the opening act in the “Lights Out” tour, before making TV appearances on AXS TV’s ‘Gotham Live’. In 2016, Orlando’s talent took him back overseas where he debut his show “Suspension, Detentions, and Summer Vacations” at the prestigious Edinburgh Fringe Festival in Scotland. On October 24, 2016 Orlando made his late night TV debut on the Conan O’Brien show on TBS.
Preliminary Round 1 Features:
Ashley Gavin, Michael Keegan, Jim Flannigan, Bret Terhune, Rachel Goldman, Jill Weiner, Alvin David, Xazmin Garza, Joshua O’Neill, Mark Gallagher, Alvin Irby
Doors open at 6:30pm
Lineup subject to change without notice
21+