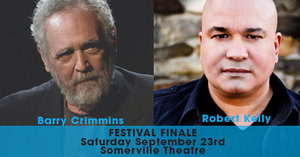 Combining iconic Comedians with icons-in-the-making, the 18th Annual Boston Comedy Festival Finales will showcase some of the best established and new comedic talents.
The Comedian of the Year Award will be presented to Boston’s own Bobby Kelly. Just the highlights of his amazing career include Jimmy Kimmel Live, Tough Crowd with Colin Quinn, portraying Louie CK’s brother Robbie on “Louie”, Bam Bam on Denis Leary’s Sex&Drugs&Rock&Roll, as well as the movies, Ghost Town and Good Luck Chuck. Most importantly, he has the unquestioned respect of his peers, Louis CK, Bill Burr and the late, great Patrice O’Neal among them.
The Boston Comedy Festival will also honor the great Barry Crimmins with the lifetime achievement award. Besides found in the Boston comedy scene in 1979, Barry Crimmins’ comedy special, “Whatever Threatens You” was recently produced and released by Louis CK. He was the subject of Bobcat Goldthwait’s critically acclaimed Netflix documentary, “Call Me Lucky”. He’s a stand-up comedy legend.
The evening will conclude with 8 top comedians (who have beaten out literally hundreds), competing for $10,000 and the bragging rights that go to the Winner of the 2016 BCF Comedy Competition!
Fresh off Gotham Live, comedian Jim McCue, “Boston’s King of Crowd Work”, will be hosting this gala comedy event.
This show has sold out for the last 5 years at the Somerville Theater, so get your tickets now!