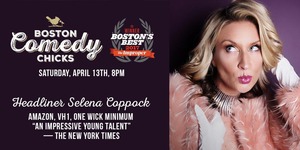 April's show features headliner Selena Coppock (Amazon, VHI, Lifetime, author of "The New Rules for Blondes") up from New York City, along with some of Boston's best comedians.