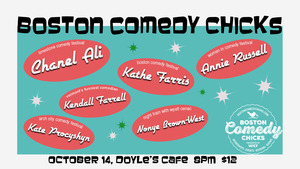 As part of the WICF family, Boston Comedy Chicks features comedians of all genders, with a focus on showcasing women in comedy. Don’t miss a single night as each month we will present a showcase of the comedians from Boston and all over the country.