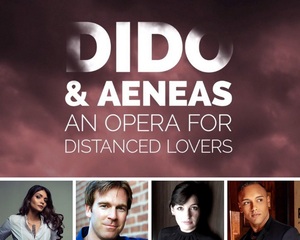 The Boston Camerata presents a new streaming production of Purcell’s only true opera titled “Dido and Aeneas, An Opera for Distanced Lovers.” Directed by Camerata Artistic Director Anne Azéma with media elements conceived by designer Peter Torpey, this production combines a cast of world-class musicians recorded in a staged performance augmented by the participation of remote singers and silent images.

The story of the ill-fated queen of Carthage, Dido, is based on Book IV of Virgil's Aeneid. It recounts her love for the shipwrecked Trojan hero Aeneas, and her despair when he abandons her. Henry Purcell's short opera, intensely powerful despite its reduced scale, distills the emotions inherent in the story, as rapidly alternating feelings of hope, disquiet, rejoicing, and mortal sorrow vie for their places in our modern-day hearts.

The show will be available for streaming November 14-29, 2020, and the digital performance includes a pre-concert presentation on “Dido and Aeneas” by Massachusetts Institute of Technology Professor Emeritus and musicologist Ellen T. Harris, and a post-performance conversation between Anne Azéma and Peter Torpey.

This production celebrates the 40th Anniversary year of the pioneering Camerata recording of “Dido and Aeneas” from 1979. That recording of Henry Purcell’s masterpiece was the first ever to use period instruments, and became a milestone in the history of recorded sound, influencing many subsequent interpretations.

Conceived and produced to be viewed on screens, Azéma’s production includes a stellar cast: Tahanee Aluwihare as Dido, Luke Scott as Aeneas, Camila Parias as Dido’s sister Belinda, Jordan Weatherston Pitts as the Sorcerer, assisted by students from Longy School of Music of Bard College and the Harvard Choral Fellows directed by Edward Elwyn Jones.