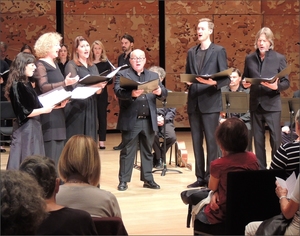 The Boston Camerata, America's preeminent early music ensemble, presents City on the Hill, a program of early hymns and spirituals from New England. The performance will take place on Friday, April 5, 2019 at 8pm at First Church in Cambridge, 11 Garden St, Cambridge, MA.

The 17th-century Europeans who arrived in North America were searching for the blessed place where they could start their lives anew. Music accompanied their quest from the beginning. Drawing on original sources, Camerata will perform songs by the religious groups who came to New England. From the Puritans to the anthem-singing Universalists of the 18th century, to the utopian Shakers whose spirituals and dance songs were central to the American dream of the Shining City, hear this powerful music performed by voices, fiddle, flute, guitar and cello.

Camerata will perform songs for voice and instruments with works by Boston’s own composer William Billings, Shaker Father James Whittaker, Jeremiah Ingalls, along with traditional English songs and psalms.

City on the Hill Cast: