BossMoves - Behind The Scenes With Kaidi & Malcolm Grant 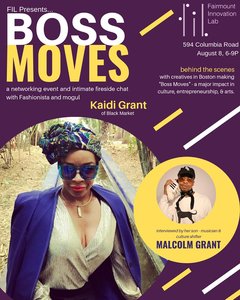 FIL presents “BOSS MOVES”, a new monthly networking event with a focus on a behind the scenes look at creatives in Boston making "Boss Moves" -- A major impact in culture, entrepreneurship, & the arts.

Join us on August 8th, from 6-9pm at the Fairmount Innovaton Lab: 594 Columbia Road, for a fireside chat with Fashionista and mogul, Kaidi Grant of Black Market who will be interviewed by her son: musician & culture shifter, Malcolm Grant.

We all know Kaidi Grant as the Owner & Chief Curator of Black Market. Through this venture, she has worked with over 150 artisans and yeilded over $400,000 in revenue last season. But, did you know that years ago Kaidi was also a make-up artist who ran her own lip balm company? She has extensive knowledge in product development, marketing and business operations- not to mention, she's as real and as cool as they come. We're excited for Kaidi to share a glimpse into her creative world and entrepreneurial journey.