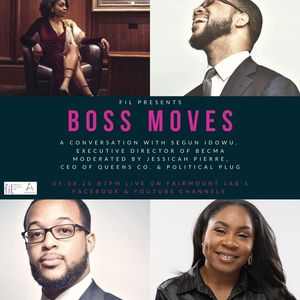 FIL presents the second installment of our “BOSS MOVES” segment, an online event with a focus on a behind the scenes look at creatives and leaders in Boston making "Boss Moves" -- A major impact in culture, entrepreneurship, and the arts.

Join us on May 8th, from 7-8:30pm, LIVE on Fairmount Lab's Facebook and Youtube channels for a fireside chat with BECMA's Executive Director, Segun Idowu, as we get to know him better over drinks and laughs on a Friday evening at home. Our Boss Moves conversations are real, genuine moments, where we become acquainted with our featured guests beyond the work they do. We are excited to have PR and marketing strategist, Jessicah Pierre, as our moderator and look forward to kicking off the weekend with these two powerhouses.

A little about Segun Idowu:

As Executive Director, Segun is an ex-officio member of the Board of Directors. He was raised in Boston and is a proud product of the Boston Public Schools. Following his graduation from Boston Latin Academy, he earned his Bachelor of Arts in History from Morehouse College in Atlanta, Georgia with honors from the Phi Beta Kappa and Golden Key Societies.

​Following his 2012 graduation, Segun decided to learn how government works from the inside and joined the office of then-District 4 City Councilor Charles C. Yancey. After two successful years as a legislative aide building relationships, reviewing and authoring policy, and addressing constituent concerns, he transitioned to the Edward M. Kennedy Institute for the United States Senate. At the Institute, Segun was able to forge new partnerships with community organizations. These partnerships ensured that the Institute invested in sustainable, local businesses and extended the opportunity for traditionally underrepresented groups to access its educational programs.​

At the same time, Segun also organized the Boston Police Camera Action Team (BPCAT) in 2014 with fellow high school graduate, Shekia Scott. The mission of the community group was to further accountability and safety in Boston through the mandatory use of police body-worn cameras. Segun and his team built relationships with community organizations and leaders, as well as engaged a vast number of fellow Bostonians, in order to explore the issues surrounding the tools. In early 2015, BPCAT released a report proposing policies for the use of body-worn cameras. As a result of their efforts, Boston police officers will be equipped with the tools before the end of 2018. For the city, it was a powerful example of what ordinary citizens can accomplish when they come together around a shared cause.

​Segun was also elected to serve as the 3rd Vice President for the Boston chapter of the National Association for the Advancement of Colored People (NAACP), the oldest branch of the oldest civil rights advocacy organization in the nation. In this role, he managed the much-heralded and research-intensive report card project that assessed the city’s efforts and results in addressing systemic disparities.

In September 2018, Segun was recognized as an “Influential Millennial of Color” in the City of Boston, and most recently, Boston Magazine named him as one of the top 100 most influential people in Boston.

Reddit
08/05/2020 19:00:00 08/05/2020 21:00:00 America/New_York BOSS MOVES Fireside Chat with Segun Idowu & Jessicah Pierre FIL presents the second installment of our “BOSS MOVES” segment, an online event with a focus on a behind the scenes look at creatives and leaders in Boston making "Boss Moves" -- A major impact in... Zoom via Fairmount Innovation Lab, Dorchester, MA false DD/MM/YYYY