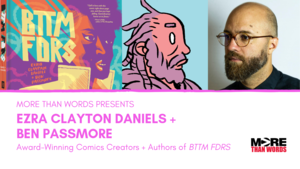 Join us for an evening with award-winning comics creators Ezra Claytan Daniels (Upgrade Soul) and Ben Passmore (Your Black Friend). Passmore and Daniels will discuss the genesis of their new original graphic novel, BTTM FDRS, which combines sci-fi and horror tropes, with the all-too-real nightmares of gentrification and cultural appropriation. Once a thriving working-class neighborhood on Chicago’s south side, the “Bottomyards” is now the definition of urban blight. When an aspiring fashion designer and her image-obsessed BFF descend upon the hood in search of cheap rent, they discover something far more deadly. Body horror, conspiracy, and social satire fuse together in this harrowing and hilarious horror-comedy by two major contemporary comics talents. Daniels and Passmore will discuss their work, take audience questions, and sign a limited number of special advance copies of the new book.

Ezra Claytan Daniels is the author of Upgrade Soul and the winner of the 2017 Dwayne McDuffie Award for Diversity in Comics. He lives in Los Angeles.

Ben Passmore is the author of the ongoing comic book series Daygloayhole, as well as the Eisner Award-nominated and Ignatz Award-winning comic collection Your Black Friend and Other Strangers. He lives in Philadelphia.