Book Talk: For the Love of Cod with Eric Dregni 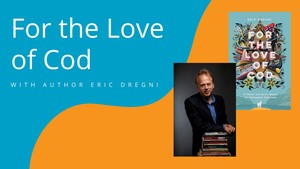 A journey to find Norway’s supposed bliss makes for a comic travelogue that asks, seriously, what makes Norwegians so damn happy—and does it translate?

Norway is usually near or at the top of the World Happiness Report. But is it really one of the happiest countries on Earth? Eric Dregni had his doubts. Years ago he and his wife had lived in this country his great-great-grandfather once fled. When their s

on Eilif was born there, the Norwegian government paid for the birth, gave them $5,000, and deposited $500 into their bank account every month, but surely happiness was more than a generous health care system. What about all those grim months without sun? When Eilif turned fifteen, father and son decided to go back together and investigate. For the Love of Cod is their droll report on the state of purported Norwegian bliss.

ABOUT ERIC: Eric Dregni is an associate professor of English and Journalism at Concordia University in Saint Paul, Minnesota, where he teaches writing. He has written or cowritten travel memoirs and essays about Minnesota, Norway, and Italy, as well as guidebooks and books on popular culture in the American Midwest.